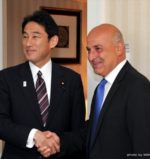 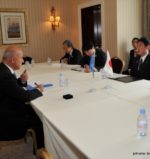 On August 26, 2013, Valeri Chechelashvili, the Secretary General of the Organization for Democracy and Economic Development – GUAM, paid a visit to Minister of Foreign Affairs of Japan Fumio Kishida, who paid an official visit to Ukraine on August 24-26.

The Parties noted the consistent, systematic and topical nature of the relations existing between Japan and GUAM. The Parties also emphasised that there is mutual interest in further developing dialogue on regional and global politics. In this regard, they noted the importance of GUAM National Coordinators’ visit to Tokyo (May 15-18, 2013).

The Parties discussed the process of implementing projects and programmes of GUAM-Japan cooperation and confirmed mutual interest in further developing cooperation.