We present to your attention the main points from the Statement by Ambassador Altai Efendiev, Secretary General of the Organization for Democracy & Economic Development – GUAM, made during the meeting:

– About unresolved conflicts on the territory of the GUAM Member States

«…each of GUAM MS suffers from foreign aggression and/or direct involvement, resulted in occupation and gross violation of their territorial integrity, in flagrant infringement of international law. Acts of aggression and occupation caused thousands of deaths, hundreds of thousands of refugees and displaced, bringing divisions and sufferings to the peoples.

…However, decades of international mediation, so far, have no results and there are no promising perspectives to their resolution. Quite opposite, the region is being used as a testing ground for all kinds of manipulations, utilizing elements of hybrid warfare, aiming amongst other, at bringing more divisions along ethnic and religious lines…

…I want to emphasize here is that all the above-mentioned problems that our countries currently experience are not originated from within their territories but imposed and sponsored from outside. And they are not of cultural, ethnic, or religious origin, but of political nature, and are being used for political reasons and purpose…»

«…As reflected in the official statements and documents, the Belt & Road Initiative is aimed at promoting cooperation, development, integration, fighting poverty and isolation through the development of connectivity infrastructure. It encompasses also cultural and humanitarian dimensions… 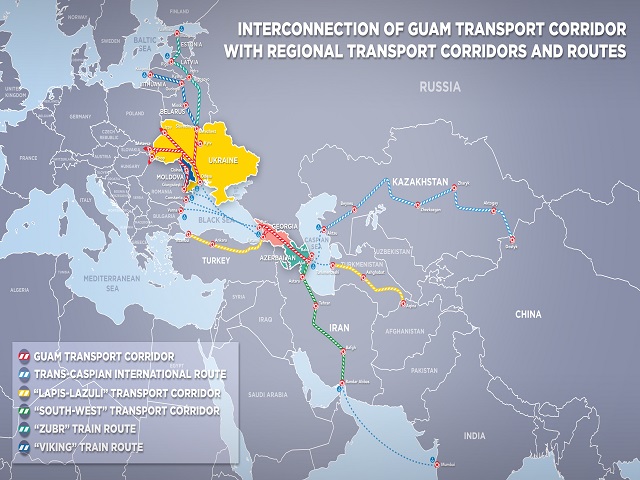 Now, how GUAM, as a regional platform and main stakeholder, can contribute to that goal… the region is emerging as an important and integral part of wider international connectivity architecture in energy and transport, connecting Europe with Asia. Currently, we are implementing our two flagship initiatives of developing GUAM Transport Corridor and the implementation of the Agreement on the Establishment of the Free Trade Area among GUAM MS and promoting our region as the area of free trade and transit, peace, development and stability…»

«…In parallel, we are also covering a wide spectrum of areas of cooperation, including tourism, culture, education, youth and sports, which are the main focus areas of the UNAOC. Development of GUAM Cultural corridor was also among the main ideas of the founding fathers of the organization.

The advantage of GUAM is that it is the only full-fledged international organization in this area with developed instruments and mechanisms of cooperation, where member states are strategic partners with converging long-term interests and objectives.

Therefore, we are keen and willing to develop cooperation with all the interested parties who share the same goals and principles. As a partner of the UNAOC, we are inviting all interested parties for cooperation, proposing to use GUAM regional platform for testing your good ideas and proposals, aimed at promoting peace, security, cooperation and sustainable development…»